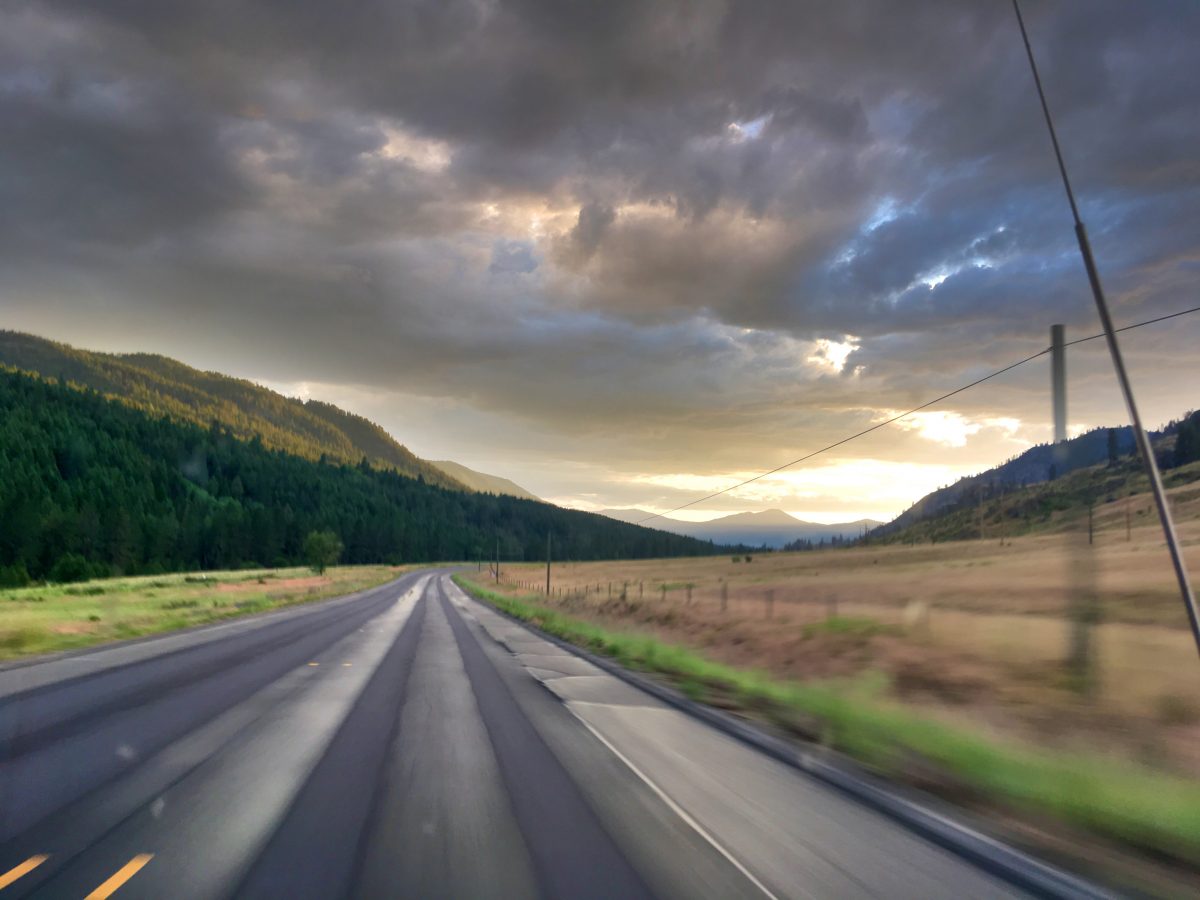 There is still an element of adventure in the trip across southern British Columbia to the West Kootenays. For one thing, there are TWO sales to pack for, which means the truck is stuffed full and working hard, and there is no chance to restock if anything is forgotten or sells out. For the other thing, the #3, the Crowsnest Highway (and any alternative routes through the Okanagan) cross a series of mountain ranges which make for spectacular scenery, but slow and sometimes difficult driving in a big truck.

With the load battened down and fingers crossed, we leave Vancouver Island in morning sunshine. Our luck doesn’t last. It’s absolutely pouring going through the city, and the wipers are on high, both hands are on the wheel, and traffic seems suicidal on the No.1 as lanes merge and exit going towards the Port Mann.

It isn’t until Langley that things ease up a bit. Then, of course, the clouds break and by Abbotsford Mt. Baker is presiding grandly over green fields and a blue sky. We’ve decided to take the Coquihalla on the way out, and come back along the #3. Many years ago we discovered a great camping spot outside of Merritt going up the Okanagan Connector, and that is always a good first day’s destination.

Turning off the divided highway onto the gravel road is to enter another country. After the cloud-forest lushness of the Coast Mountains, even the endless tracts of lodge pole pine which thrive in the interior have given way to rolling grassland. It is only 2 km on narrow corduroy to a small lake, but it is a million miles down the road to rejuvenation.

There is no real campground; just a pull-out beside the lake, a picnic table that was made with planks thick enough to build a bridge, an out house where a swallow has a clutch of eggs and hovers nervously by the window as you do your business, and a massive ponderosa pine that rules the entire realm like an emperor. Sometimes cattle drop by to bellow and wade into the water, but mostly it is just us, ululating loons, and the sleek flash of ospreys fishing for trout.

In the morning we go up and over the Connector, and down into the sprawl of west Kelowna. No reason to linger there. The day warms up quickly, and by the time we turn off in Penticton the jackets and sweaters are gone and we are in T-shirts and sun glasses. Our destination is the Naramata bench, holy ground for wine lovers in BC. The dozens of wineries here have consistently put out some of the best product in western Canada. Along with the acres of manicured grape trellises, properties lines with Lombardy poplars, a shimmering view of Lake Okanagan and, of course, unlimited wine tasting, Katheryn has called Naramata “Disneyland for adults”.

The problem is that we are on a tight schedule; we are due in Rossland for dinner. This means less random stops than we would like, a brutal policy of tasting only what we are interested in buying, and short pours into one glass, which we share. We plan our strategy while we drive. First: Van Westen.

This was a random stop years ago which has become one of our favourites. Robert Van Westen is an artist who works in grapes. He was born in the house adjacent to his property (now owned, coincidentally, by Joie, another award-winner and friend from Katheryn’s restaurant days), and lives and breathes terroir. He will often do an insanely small batch, and drive it down himself to Vancouver to market. We come here for his signature “V”, a Bordeaux blend with a finish as long as A Day in the Life.

The Naramata vintners are a close and supportive lot, and Robert turned us on to his near-neighbour Deep Roots. We also consider a stop at La Frenz essential. Apart from the wine, the view from their patio is what was on the old $100 bill. Coincidentally one year I had one in my wallet; the owner offered me $101 for it. A one ton truck isn’t the best vehicle for touring the small lanes of the bench, but we plunge down the steep driveway to Howling Bluff anyway. By now our time and budget are running out, but we stop at Hillside for some of their more affordable whites. Red Rooster used to be one of our fav’s, and we still have a soft spot for them buying “Frank”, a bronze nude that was controversial and vandalised in Kelowna for being “obscene”. We can finish topping up the wine cellar with any number of great options – Lang, Therapy, Elephant Island, Black Widow, Morraine… Sigh.

But there is still a lot of ground to cover today, and the problem with a wine tasting campaign BEFORE NOON is that motivation is reduced. Nevertheless we soldier on down the Okanagan, blinders on to the OK Falls, Penticton and Osoyoos wineries.

There are still two big hills for the truck to climb. Anarchist Summit on the #3 east of Osoyoos used to be a killer. With several grades of more than 10%, and with a desert-strong afternoon sun beating down on it, the old truck would always over-heat. It’s not nearly as bad now, but it’s still slow going around the 20kph hairpins. Then comes the descent into the Kettle Valley, another of the beautiful areas along the route, even if Rock Creek was half destroyed by fire a few years ago. Then it’s up and down into Grand Forks (devastated by floods) until the next big hill: Blueberry Paulson.

Also known as Bonanza Pass, this is the highest summit between the coast and the Kootenays. By the time we get up to the top – over 1500m – the air is so fragrant it could be bottled and sold, and the sun is soaking the snowy peaks with soft light. Nancy Greene summit is actually higher than Bonanza Pass, but all the hard work has already been done as we turn off there to take a skyline of a highway to Rossland.

If you’ve never been to Rossland, you should go. It’s a heritage town with one of BC’s most challenging ski hills – Red Mountain – and a population of hard-core out-door fanatics who love being there. But that’s next weeks story, when we have our virtual sale in Warfield.

Until then stay safe, and thanks for reading!