From Manilla we are heading to Java via Borneo. A cheap Air Asia flight gets us from Clarks 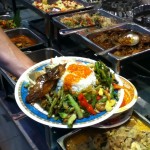 airfield (the old American military base outside Manilla, now being reincarnated as a terminal for low cost airlines), to Kota Kinabalu the capital of the East Malaysian state of Sabah. To say KK is different from Manilla is an understatement.  It’s not that I felt threatened in Manilla, but walking around after dark I definitely had my defensive shields up; KK  feels as dangerous as a shopping mall. And, like everywhere in Malaysia, there is great food everywhere. After the unexciting fare in the Philippines, we cruise through the open air harbour-front night market in KK, our eyes devouring all the options, and eat nasi campur – rice with a selection of curries, tempe and fish – by the bare light of strung up bulbs with the smoke of charcaol braziers in the background. 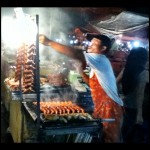 We would love to get to some Borneo rainforest – Katheryn has a swing-with-Orang-Utang thing- but the depressing fact is that in Sabah there is little left, and what is, like the Maliau Valley, costs in the range of $1000/person to access. Instead we decide on the Kinabatangan River. The tourist office offers limited assistance to the independent traveler – they are programed to book you into the $100/day (each, and that’s the budget end) package system. On line we find one name that comes highly recommended – a guide named Osman – but the contact number that has been reported, and then regurgetated for him doesn’t work. He isn’t in the guide books, the tourist office, of course, knows nothing, and the home stay association for the two tiny villages on the river where he lives say he isn’t registered, and must be “illegal”. It takes hours to track him down – at 019 841-5259, if you want to know – and then to set up a 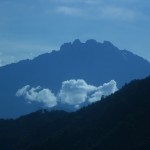 meeting point where the bus will drop us. Osman, the reputation goes, finds elephants.

Apart from passing under the flanks of Mount Kinabalu, the most impressive thing about traveling across Sabah is the extent of the oil palm plantations. “Endless” as in “endless wheat fields” is the opperative. What I hadn’t expected was how encroached-upon the Kinabatangan itself is. Osman meets us with a pick up – he had been in town to drop off another group, and get groceries – and instead of turning on to a rough jungle track, we speed over a smooth highway – surrounded by oil palm 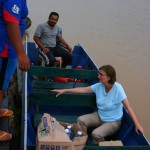 plantations. His house is by boat access only, and at least it surrounded by forest. There is just enough time that afternoon to drop our bags, grab our ponchos, and head down river with Osman. He says the elephants are a long way off now – he will need extra gas money to get us there. Well, okay: it is wild Borneo Pygmy elephants we’re talking about. Happily, we skirt the worst of the rain cloud, and Osman sashays his skiff around the branches and debris on the big milk-chocolatey river. After a while he pulls up. “I can smell them”. Well, I can hear them: an alien-creature-about-to-eat-us crashing somewhere behind the 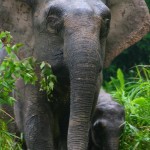 required screen of thick vegetation. “They’re coming that way!” And we gun off a short distance, and plant the bow on a muddy bank and scramble out. A slurry of mud and elephant dung overwhelms my flip flops and oozes between my toes. I briefly worry about leeches, but Osman’s vigourously signals “squat down”, and the cracking branches and grunts and growls and screams materialize into a trunk and flapping ears. A mother and two young emerge  5 metres away, catch sight of us and stomp and turn uncertainly, and then settle on a detour around us. There is still a discussion of just what, taxonomically, these elephants are, but Osman seems confident they won’t kill us, and that is all, right now, I need to know. 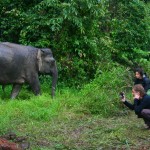 elephants, and one school recognizes these as the decendants. If this is so, they are the last of the species, since Javanese elephants are extinct everywhere else. Other researches have taken DNA samples, and classify them as a unique indigenous breed. Commonly called “Pygmy elephants”, they are hardly minature: somewhat smaller in stature, they are also distinguished by longer tails, straighter tusks, and – I read this later – very unaggressive (one account used “apologetic”) dispositions. This last in contrast with the attitude of the neighbouring plantations, who shoot at them when they “encroach”.  As a elephant legs lands very close to us on the bank, Osman points to the knobbly, overgrown scar tissue around an embedded bullet.

We are given a leisurely, luxurious, up-close immersion in the presence of these wonderful creatures, and film and talk with them at will. When fianlly we hear the hum of another tour 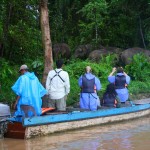 boat honing in, we know it’s time to go. The way back to Osman’s house, the price of admission paid, we take more casually. Lots of monkeys patrol the branches of their shrunken realm, and we get close to macaques, red and silver leaf monkeys, proboscises, and, in a league of his own, a solitary male orang utang.  He is high in a tree, squatting in his nest, and although I can only get a good view of him through binoculars, to me it is much more satisfying than the staged feeding demostrations at the “rehabilitation centres” that tours are so fond of. 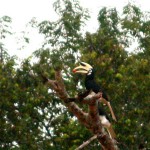 The other creatures of note that we see in profusion along the Kinabatangan are hornbills. Hornbills would have loved America in the fifties, when cars had fins and Elvis was king. There is a lot of doo-wop in this bird, and a greaser gallantry, like when he brings his lady a big red fruit in his beak, just to say “I love you”.

Back at Osman’s, it is school holidays, so as well as his own 6 kids a load of their cousins are over for the break. It doesn’t take them long to do some birding of their own; that is “Angry Birding”. When they discover Katheryn and her iPod addiction, their stint in the country just got a whole lot better. Night falls and the jungle world comes alive. Cicadas trill and frogs chime, leopards hunt and monkeys howl, and on the lamp-lit porch beside the old rhythms of the soft flowing river, kids 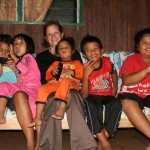 have a hoot shooting exploding birds at stone-swathed smirking pigs on a video screen.

These videos have sound effect – un-enhanced, I may add!